I had a new hoodie printed up and it just arrived. I love it so much. It’s sooo comfortable and warm. 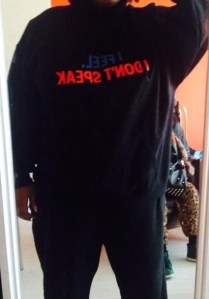 Five Finger Death Punch (best.band.ever) sums it up very nicely, how I feel right now (and every other day, basically). So let me quote the following song….

I’m so fed up with everyone around me
No one seems to care
I’m just so far gone and nothing’s gonna change
I’ll never be the same
It’s always do this, do that, everything they want to
I don’t wanna live that way (No!)
Every chance they get they’re always pushing me away

It’s all so messed up and no one ever listens
Everyone’s deranged
I’m just so fucked up and I’m never gonna change
I wanna lay it all to waste
They’re always say this, say that, nothing that you want to
I don’t wanna live that way (No!)
Every chance they get they’re always shoving me aside

It’s almost 3am and I’m wide awake, no shock there.

Last night I spent all evening digging through my storage space downstairs and I threw out a lot of stuff but I also came across a lot of old stuff. Some of which were my case files from the courts when I was 17 and I went through it all, especially because these were copies they had given my egg donor (for those just tuning in: that’s my “mother”) and I had honestly never laid eyes on them before. Suffice it to say: it triggered me and I got very upset. I was insanely angry and just raging.

As always, I immediately reached out to D. And he managed to calm me down a bit, after which I was finally able to stop bouncing around the house and feeling restless.

I have a lot to say about how I felt when reading all these court papers and I plan on dropping a post about it tomorrow. It might be a bit long so and filled with rants but I promise that it will be a good read, especially since I’m going to be VERY honest and very blunt.

So stay tuned and don’t change the channel!